Is it ironic, that the day I complete a 100K trail race, my car breaks down on its turn to take me from the finish line home, less than half that distance? In the moment of my car break-down, (of course, at midnight after the race) I can say that my legs, my lungs and my mind overpowered my car. As sick as it sounds, that’s what endurance sports are all about! “Can I outrun my car?” YES I CAN!

(The fact that it’s a retro 90’s honda may give my legs an advantage, but that’s besides the point.)

The Baker Lake 100k was initially an idea from my Seattle running crew, which I immediately declined. I mean,  it was the same date as Club Mud’s First Annual Vertical Beer Kilometer, and Barry suggested that I could translate my horizontal beer mile skills to rock the altitudinal edition. (Compliment? ? ?) But what about this 100k? I did the math quickly: the Baker Lake 100k starts at 6am near Mt. Baker, USA, then the Beer Kilometer starts at 4:30 in North Vancouver, Canada. Hmmm… So, I would have to run an 8-hour 100k if I wanted to leave Baker by 2 and run away from the race and toward the border like a maniac doing a drug run. Ya, no.

So I would have to choose: fun versus more fun? Ultimately, the Baker Lake 100k won my heart, there was definitely something scary and uncertain about it… I had never run a 100k before, only about 75 a few times, and I hadn’t trained specific for it. I didn’t even think about the idea until two weeks before the race, and I liked that no-pressure approach. I wondered how I would fare in a situation when I wasn’t really training for anything, just fun long runs.

I decided I would run really as fast as I could over the 100k, so that I could make it to the post-beer-mountain-party. Formula to success right there! I figured it would be amazing to see the aftermath of that event, it was almost better than doing it myself.

As we always do, we arrived to the campsite at 11pm before the 6am race, and everything was very ghetto, which I adore. I wore my race clothes to bed in the tent, and woke up to the delight of force-feeding cold oatmeal 5am. Yay! But we had to start early if we wanted to enjoy the evening.

Baker Lake is a Washington Classic I am told, and I can see why. The course is a 25k out & back single track trail that rolls and winds in the vicinity of Baker, with stunning views to the mountain, fun streams to stomp through, fall leaves and bright green moss… With a 50k going on at the same time, it was a cool chance to meet up back and forth, and get to know familiar faces in the race.

I realized within the first 25k out stretch that it was going to be a long, long day if I kept thinking in a competitive mindset, about the nearest woman behind me, and where she was, and how I was being chased … So I decided to switch things up. I fired that frightened, comparative leader inside my head and created a new mental state which was one of team-based collaboration. I thought of everyone out on the trail as my teammate, the other women and I were all working together in trying to set the fastest course record. I pictured that we were setting the standard today for what women can achieve, and this made me feel calm because it was no longer about a meaningless, stressful goal like beating everyone. It was an inspiring, team-based goal for my whole mind and body to rally behind.  (Coincidentally, it pushed me to go faster.) I kept imagining I was the yellow jersey-wearing captain in Tour De France. If I worked as hard as I could and then one of my teammates passed me to improve the course record, that would be awesome. In my head, it became a team effort to work together and collectively set a stellar female course record, and hell, let’s try to get as close to the men’s course record as possible! 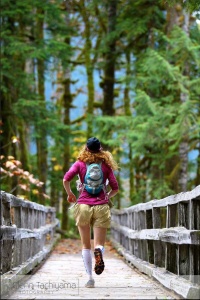 From the amazing Glenn Tachiyama!

That spirit worked wonders for my sense of fun and calm, and I think it reverberated through the trails. Everyone running the opposite way on the 25k out and back trail  cheered and congratulated me even though they were racing, it was amazing. I even trained people to high-five on the single-track trail after the 2nd encounter! (They were all too surprised the first time.) Coincidentally I found myself catching up with the top 3 men.

Then there were about 30k left and I couldn’t wait, because Tara was waiting at the 75k turnaround to pace me home! It would be so fun… To my surprise I caught up to the 2nd place man, Nate, about two miles before the turnaround, he seemed very surprised. We approached the turnaround together to see Tara, doing a special skipping rope dance for us! I’ve never been so impressed.

Tara and I took off with Nate, we’re all stoked that we will run together. Then, oh no, hyponatremia! I’d made the mistake of taking a very small hydration bladder that day, then running out of water and electrolytes for the past hour without letting up, and for some reason now it caught up with me. My stomach felt like it was full of sloshy water balloons, I started to feel very lightheaded and dizzy, and puking would have been a blessing. Unfortunately when I enter that fun state, it’s like a sinking ship, it’s almost always too late to revert back quickly, because my brain is no longer working very well to help myself, and the only real solve is not moving. In my hazy state of mind it took me about an hour to realize what the issue was, and then I downed 6 salt pills back to back. (Questionable, I agree!) Nothing would return my previously glorious state. Although the people running toward me didn’t know it, and one even commented, “look how happy the fast people are!”  I spent the last 20k running in huge amounts of pain,  asking Tara to tell me stories, miserably downing Gu Brew to a sloshy stomach, and smiling for everyone who came my way. If the first 75k were a blue-skies kind of experience, the last 25k were a physiological test for me.

That’s about when this picture took place. 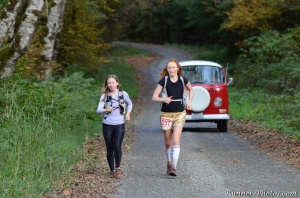 I saw a glimmer of the campsite and for the first time in a race, did not sprint to the finish. And to my delight, Broeke, Angel, and Tim appeared, and I no longer had to think about the last 100 meters. They cheered and ran with Tara and I to the finish like a big family, while Tara was jumping over the skipping rope, unless I was hallucinating. As we ran in, everyone cheered for us as the third person and first woman team, and they told me I looked fresh, like I hadn’t run more than a few miles. If only they knew how my stomach felt, I thought…

Two days later, I can still rely on my trusty legs, but not my car. That thing’s still in the shop, sending the mechanics for a hey day.