On September 30, I got selected as one of the last team members to represent Canada for the World 100k, after running a 50 miler under the qualifying time of 7 hours at Elk / Beaver in May. The race was in 7 weeks, and it would be held on roads in a country I had never seen before in Doha, Qatar.  Although I hadn’t done any road running in two years and didn’t expect to thrive in a hot climate, I accepted quickly. 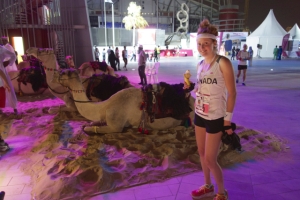 And so began the conversion of a wild, arguably un-coachable forest runner. In the weeks before this, my “run training” consisted of adventures like canoeing to Anvil Island then run/hiking to the peak and back, or running and canoeing from Porteau Cove to Whistler. (Not a good idea.) Now suddenly, my runs became more structured, planned, timed. It was a big change, but it was the only way I could fathom showing up to an event for Canada, and an event I had never done before, by getting really OCD with the time I had. The race would entail twenty 5k loops on tile and tarmac, so I became obsessed with “scenic flat loops”. I ran Victoria’s Elk / Beaver Lake, Burnaby Lake, Beaver Lake. I found myself running a tempo run, 70 laps of a track on a Tuesday night.

This is what I wore heat training on the treadmill.

In hindsight, I was acting rather nervous. It was going to be my first ultra on the road, and I figured it would be completely different from trail running, so I threw out my usual fun runs and hastily replaced them with a “plan”. I started doing 40-50k tempo runs, and the week before I left, I heat trained every day. I ran in full-on ski clothes on a treadmill, I sat in steam rooms for an hour at a time, and on one occasion, I got to run in a climate chamber at Doha’s exact conditions, thanks to some old friends. My work was amazing for letting me train when I needed to, and so were Julien, Mike, Tara and Nancy for joining me on some of the “fun”. These poor souls ran more laps than they could have ever predicted. Tara even did a heat training session with me for no reason!

The 100k organizers said it was okay for us to wear shorts in the race, even though it’s typically less than ideal for women to strut around in shorts in a Muslim country. I was doing great, wearing long black pants during the day, until one day I really screwed it up. When Julien and I arrived to our first hotel, we thought it would be fun to go for a gallop toward the crazy downtown skyline, which looks very Vegas-inspired. I waltzed out of the elevator in my typical hot weather gear– a tank top and shorts– completely forgetting that the rules also applied to running before the event. I didn’t get farther than the exit before putting a whole group of men into complete shock. They walked into the elevator toward me, and completely jumped, exclaimed something loudly, and smiled at me. It was like they had seen a naked woman covered in gold foil and handing out free flights.

Being good with full length pants!

Other than that, for most of the time leading up to the event I experienced a very sheltered lifestyle, holed up in a 5-star called the Torch Hotel, which served as the athlete’s village in the Aspire Zone. Julien and I had the weirdest daily routine at this point in time. We worked remotely through the night, our office a room where we could change the colour of the walls to suit our mood. At sunrise, we packed it up for the day, ate breakfast buffet, made friends, and then slept through the day. Come evening, we woke up and had dinner with athletes from all over the world, went for a run, and went back to work, into the night.*
*one day I slept double while Julien worked.

This is the crazy hotel we stayed at, Torch Hotel. You must go stay there! It’s insane!

My favourite part of this race was getting to know runners from all over the world, and getting to team up with a crew of inspiring people from my own country. I met our team manager Armand, women’s teammates Alissa, Dennene, and Kiriam, and men’s teammates Oleg, Dave, and Sebastien. They were all very inspiring people, some with kids to raise, one who didn’t start running until his 40’s, and all of them tough weirdos who train all winter in places like Edmonton, Calgary and Quebec. Although I’m a bit introverted and probably whined at some of the group photo shoots, I felt really lucky to hang around these guys for the week. 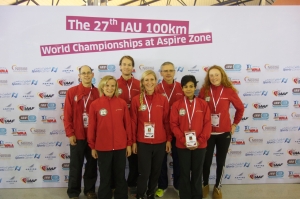 I’m not sure how it all came to be, but I was able to recruit my sister, my boyfriend, and my friend Orso, to cheer and support me in Qatar. (!!) My sister Melissa came from England in a heartbeat. Meanwhile, Orso happened to be living and working there, including some work on the event I would be running. And Julien is just always up for an adventure, especially sports competition environments, and willing to work from Qatar to make it happen. These guys cheered for me throughout the race, and Julien/Melissa even joined Jelena as the Team Canada crew, helping all the Canadian runners every lap at the team’s own aid table. All together, we had Armand, Jelena, Julien, Melissa, and Orso to help us run laps through the night.

I also had a huge digital support crew from my work, RunGo. RunGo’s founder, Craig, was a huge supporter of this goal, sponsoring me to attend, encouraging me throughout training, and granting me tons of time off for the race. They were also leading tons of digital cheering during the event, and probably knew my pace even before I did!

Although I knew the heat wasn’t going to be my thing, the late race start-time sure was. At 6pm, I feel amazing for running, and I was excited to have a really chill day of zen before the run. My day consisted of sleeping until noon, changing the colour of the walls to green, visiting with my sister, and drinking coffee, and then some fun warm-up activities at the big indoor track & field stadium.

The race course actually looked pretty sweet when I first checked it out, dropping my food and water off at our team aid station. Palm trees were lit up in pink, camels were hanging out on plots of imported sand at the start, and a bunch of interesting tarps were set up, which we would get to run under.

Looks pretty sweet, right? This is right before the race.

We all gather over to the start line, and I took one last glimpse across the crowd to see Melissa and Julien, the last I’ll see them until the aid station. The race gets underway, and I start out doing a pace I think is about right by feel. (Everyone seems to have a watch on, but I figured I didn’t need one.) Luckily, I seem to be running the same pace as my teammate Alissa, which is awesome. I think to myself, how cool it would be to run the whole race and help each other! A couple laps go by, and I can already feel the heat making me feel subtly trapped, like I’m back in the sauna in Vancouver.

Maybe I shouldn’t have started out running beside Pam Smith.

I felt great for those first three laps, running free, without a watch. But by lap four, with only 20k in the bank, I could tell I was going to struggle today. I was already feeling strained, forcing it, not talking and laughing as much as I should that early. I’d see Ellie on the out and back sections, and I could tell she was way more relaxed, to the point she looked like she was out on a run, not a race. She was giving me lengthy advice as she’d go by, and chatting with the other women like a Sunday run, actively conserving. But I didn’t want to believe it.

And then this happened…

My sister, Melissa, at her first ultra. Yayyy

Starting lap five, my pace progressively deteriorated from 23 minute range 5k laps, to 24, 25, 27, and by lap ten, 30… 33… 35! As I predicted, I hit a really weird physical state. At first I became dizzy and lightheaded, even though I was eating. Eventually, I became really nauseous. I was unable to eat anymore, and I started taking long breaks to cover myself in a cold towel every lap. I kept thinking about just making it around the next lap, and then I could sit and drape that cold towel all over myself once again. Finally, I puked mid-way into a lap. The worst part of it all is that my teammates were also suffering, even more than I was. Both Alissa and Dennene suffered from the get go, and there was a lot more nausea involved.

My splits from the run, highlighted in blue, are pretty funny. (Funny now, less so then!) 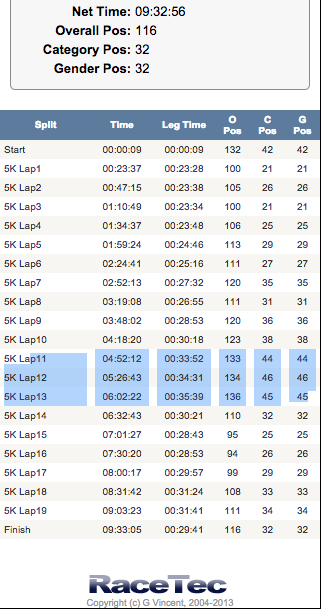 Highlighted are my favourite moments of the run, puking.

At this point, I started to see how it’s really done, as the first lead females came back to lap. Just as the best runners had held back earlier, I could tell they were only just starting to get serious now. Ellie flew by me on my 9th lap, and she had only just switched into race mode.

After dealing with my nausea, I felt the sensation of enjoying to run again, which was extremely uplifting. (See split around lap 15!) I started to think that maybe I could turn this around entirely. I wondered, could I get back down to 25 minute laps? I was totally motivated to try, but this only lasted a few minutes. Before long, my entire body started cramping, shooting pains unlike anything I had felt before. The new goal was just don’t walk / at least pick it up a bit when you see your supporters, who flew all this way. And even though my race wasn’t going to plan, I found enjoyment in sharing the experience with the very best runners that day, which will inspire me for a long time. Specifically, I will always remember watching Max and Ellie powering through their last laps.

Finally I found myself on lap 18, 19, 20. Those last few were as tough as I imagined, and I had to play mind games, visualizing each kilometer to make it through. Except for the last one. At kilometer 99 I was handed the Canadian flag, and it gave me this amazing energy. It was a unique experience, and one I hope to earn again. 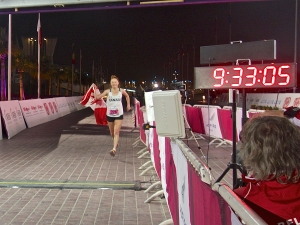 After wobbling in and out of the ice bath, I watched the rest of my female teammates come into safety, Kiriam not far after me, and then Dennene, and then the sunrise. And just like every other day, we finished the day of work with a breakfast buffet, before hitting the hay, a hard day’s work all done.

Here are some links to peruse!