Hey there! If reading isn’t your thing, cut to the chase and check out my photo journal from Worlds. Otherwise, only read this if you’re interested in making a national team, interested in what it’s like to have a bad day running for that national team, or, in the case that I paid you to be my friend in miles, of course. Here’s my tale.

Saturday, around 7am in Annecy, France.

I’m running at the World Trail Championships, and instead of flying like a pterodactyl up and down mountains as I envisioned, I’m sliding backwards in gooey mud up a steep climb, going down, instead of up. An easy target for yet another Euro runner with poles.

You can qualify for the Canadian women’s national ultra team by running a sub-7 hour 50 miler, which can lead to selection for both the national 100k team, and the national ultra trail team. In my case, I ran the Elk / Beaver Ultras in 2014, which is 8 laps around the lake for the 50 miler. During my race, I was fuelled by a whole crew of friends who helped me reach my goal, including friends from Seattle who ran reverse laps in huge party frocks, and Ironman-inflicted friends who had biked all the way from Vancouver just to holler at me as I circled around each lap. With their help, I ran 6:58-something in my jean vest and qualified. Six months later, I got selected for the trail team, which was bound to run a beautiful course around Lake Annecy, in the French Alps. I couldn’t resist. The course was 85k in the mountains around the lake, with 5300 meters of gain and descent. It looked amazing. To help me get there, I was lucky to get supported by Bremner Foods, who have provided amazing support for my travel costs. And the best juice on earth! 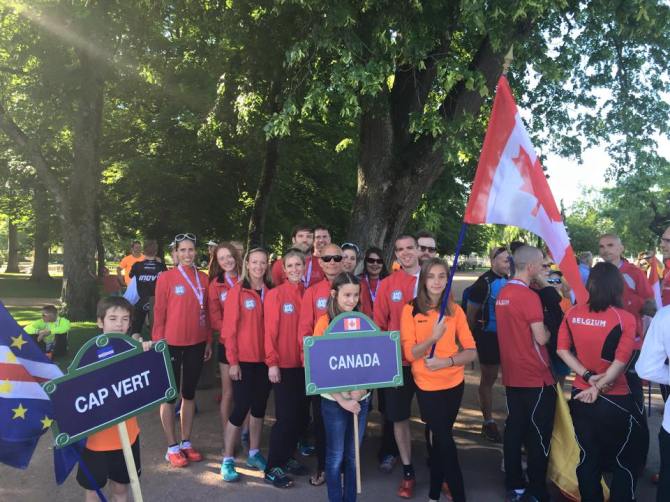 My first time representing Canada was for the World 100k Championships in Qatar, which was a mediocre performance I was really hungry to improve this time. At the start line, while jammed against all the trail runners from all over the world, I told my teammate Alissa… let’s make up for Qatar! And while I meant well, I didn’t know what was ahead. In retrospect, my mistakes are so clear and easily avoided…

Early Signs of Self Doubt

I was in and out of the first aid station at Montagnue Du Semnoz in seconds flat, excited for the first descent. Downhills are always my strength, and I was excited to gain on people here. But I wasn’t flying away from people. I found myself traveling down the hill, at average pace, and with a lot of effort. I actually couldn’t wait for it to end, but I still had a thousand meters to descend— on this descent alone. I still had more than 4,000 meters to descend ahead of me! I was scared, and my composure started to crumble. I started to beat myself up for not being faster. One girl even had time to make out with a guy on the sidelines, then hop back on the course in front of me, which didn’t help.

The second climb to Col de la Cochette was steep, and muddy. At times I would slide down backwards, as girls with poles would dig in and fly by me up the hill. The negative talk continued as these Euros climbed the hills way faster, leaning into their poles and flying up the hill. Power hiking isn’t my strength, but I can usually swing it when I have a positive attitude. And here I was, clinging to the grass on the side of the trail, trying to power hike thousands of meters with a doubting attitude. I started to wonder what I was doing here, why Tara wasn’t here instead of me, and I couldn’t find any good reasons. 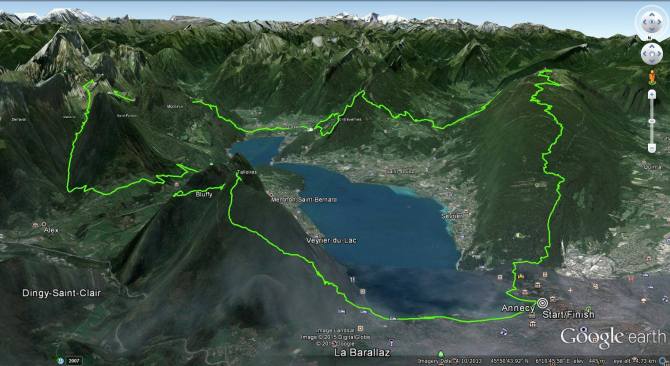 And while I battled myself, I forgot to take care of myself. I guess I’m used to races with shorter distances between aid stations, where my boyfriend will bar me from leaving until he sees me devour a sandwich.

But at Worlds, I had large swaths of time alone, eating a bit of dried mango here and there, but nowhere near the rate my body needed to propel me. Instead of focusing on eating every thirty minutes, like I normally do, I was focused on doubting my abilities, questioning my reason for ultra-running in general, and entertaining questions about life purpose. In this weird, cynical dialogue, I got way behind on calories. The bars I homemade for this race? Didn’t want a bite of them! I ate a few pieces of mango and delved into my deeper, self-doubting conversation.

And as the thoughts got worse, the thought of remembering to eat seemed less important, I was sucking anyway. Sadly, I was on a downward spiral. Not eating enough led to more negative dialogue, which led to less eating, and more mental sabotage.

I finally arrived at the aid station two, at 44K, and I already wanted to drop. Since a brief fun moment with Alissa and Mel around 12k, I hadn’t had another positive, even neutral moment since. But when I saw our team crew, I couldn’t admit to them that I already wanted to drop. They were still encouraging me in race mode, so I grabbed a piece of bread and cheese and left, uncertain whether I felt good enough to make it to the next station.

The next parts of the race are a blur. There were some huge climbs, some steep descents, and a lot of general wanting it to end. It was bizarre: I was seeing the most beautiful views I’ve ever seen, alpine valleys with goats and huge jagged peaks and wonderful cheering French women, but I couldn’t shake my downward spiral. At some point, Alissa passed me moving really well, and I told her that I was thinking of dropping. I was now the 5th and last Canadian woman, I wasn’t adding any points to the team, (only top three times count toward the overall team time) and I wasn’t having fun. I couldn’t find any reason to continue.

Around 55K, after more and more negative thoughts about ultra-running, I decided I needed to bow out. But there were still 15 long mountain kilometers to go until the aid station. I didn’t know how to drop otherwise, so I walked the 15K to the aid station. I spent the next two and a half hours death marching downhill, looking for other ways to drop, and finding none.

At 70k, I told the team that I was dropping, and this time it was easy because I hadn’t eaten enough to continue, anyway. The team was absolutely supportive. They offered me the idea of finishing the last 15K as a “nice walk in the mountains”, with no pressure for any time whatsoever. At this point, I knew it wouldn’t be a “fun walk”, because I hadn’t eaten anything during the prolonged 15K death march. I dropped, and was welcomed off the course by our crew, Kevin, Ryne, and Hamish, making things end before they got way worse.

I was lucky to eventually complete that last climb, but on a different day, with my sister Melissa and with Alissa. We had a beautiful day on the last section, and I was so lucky to make it up there finally! 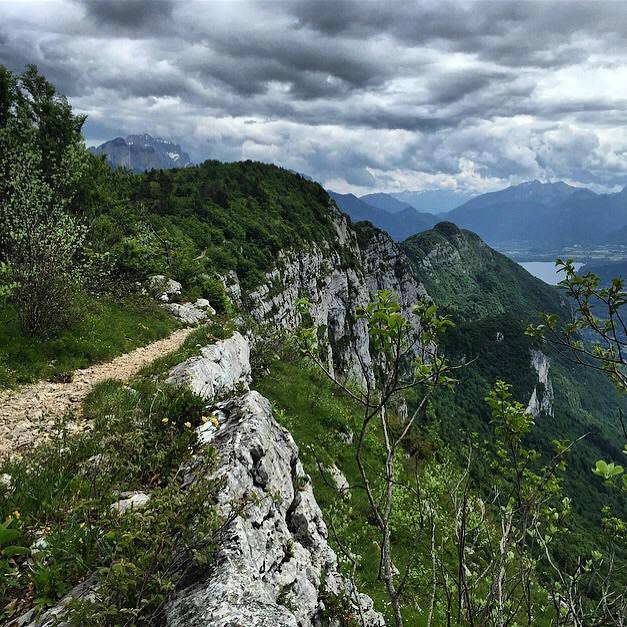 The ridgeline after the last climb on the course. Photo courtesy Alissa St Laurent.

What separated the winners in Annecy, was their attitude. The eventual winner, Nathalie Mauclair doesn’t even live near mountains, and to help she used mental training to prepare for the race. Meanwhile third place finisher Maite Maiora ran with a broken bone on Saturday.

I learned the hard way, the importance of being kind and patient during big goals, that bring tough challenges. With more self-compassion earlier in the race, I would have helped myself stay focused on the simple necessities, things like eating, and putting one foot in front of another, smiling and taking myself a little more lightly. I think this applies beyond running, and to life as well. If we really put ourselves out there for something big, we will be in deep, well above our heads, and it’s so easy to get frustrated and overwhelmed when we don’t see the results right away. But results take time, especially when we set an audacious goal that challenges us to the (current) limit. The only way to make it up to that huge goal, is to progressively work through it with small steps, and respect the process. One day, we’ll surely achieve that goal, but if it’s an audacious goal, it may take 10 years. This, I forgot in Annecy, when I expected top performance at Worlds at my first rodeo.

I also learned the value of my normal approach, of running for fun, first and foremost. As soon as I made this race super competitive, I lost my usual guts, drive, and determination. I love to run for the adventure, and for me, the results come from there. I briefly forgot that in Annecy, and I lost my special power that day.

Also, I’m convinced that a mid-race French ice cream sundae intervention may have been a game changer.

I want to thank all of my teammates who raced hard, to our team manager Ryne, who kept us laughing for the whole week in France, and to our awesome crew— Stacey, Tiffany, Hamish, Kevin, Bob who flew all the way from Canada on their own dime to support their loved ones. I’d also like to thank Bremner’s Foods for supporting my journey, and for making damn-good berries, juices and wines without compromising on your values. I’d also like to thank french wine, fondue and sunshine and the beautiful Lake Annecy for an amazing trip.

Overall, I had an amazing experience and I’ll for sure be back to run the same course and complete the beautiful traverse! 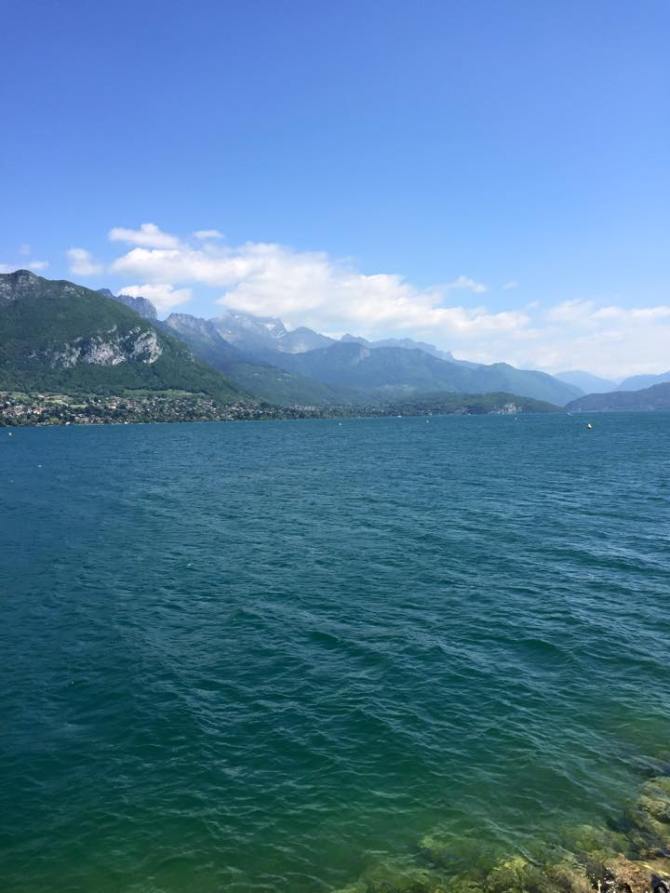