On Friday, Tara and I jumped on a plane to Sacramento with a goal of making it to Auburn, California… a town which introduces itself as Endurance Capital of The World. We were going to run Ann Trason’s Overlook Endurance Runs, which is now in its third year, on the Western States Trail.

Although I managed to run Ann’s 15km race without any big screw-ups, (this time I used RunGo during the race to stay on course!) most of the trip, I felt like a walking liability. Here are a few (painful) lessons from this trip!

1: Please, please never forget your driver’s license!
This one was the most painful. We had an Expedia car rental that was pre-paid, and unfortunately the booking was under my name– then I forgot my driver’s license. You would think, that you could go to the front desk of the car rental place and just ask them to put the car in your friend’s name, who is right here next to you, with all the proper licenses you forgot. Unfortunately what ensues is you get caught in a dark, dark, black gulf of service, an uncertain area where both Expedia and car rental company seem to have no control and no “access” to change your itinerary. 60-90 minutes on hold and various conversations with Expedia may occur. You will eat all of your trip chocolate right out of the gate and maybe cry aloud in pain/frustration before you just opt to pay again. Fuck it.

2: Nexus does not = passport!
I’m not sure why, but the night before my trip I put my passport down on my bag, and then consciously removed it and put it away in the cabinet on the morning of the flight. All I need is Nexus for ID! I thought. Although not as painful a mistake as #1 above, airline and customs people don’t love to deal with creative formats of ID and it just amounts to adding 10-15 minutes at each airport you visit. Vancouver, Seattle, Sacramento, and then the return flights… not to mention your poor friend standing next to you! Packing ultra-light was misguided.

3: Not all dish soaps are equal!
I felt very useless as a guest in Ann’s home, with cooking skills that were inferior to the lovely Italian guests, and general unawareness of my surroundings. At some point I realized that I could help out by jumping in and doing the dishes. (Which isn’t actually that helpful, considering it involves a dishwasher!) Anyway, I found some sort of organic soap under the sink, and pre-loaded it into the dishwasher for Tara and I to complete our task. Inevitably I went for a run with Ann’s dogs and came back later, walking upon a scene of Ann and Tara, cupping large handfuls of frothed soap from the dishwasher and transferring them into the sink. I had used the hand-washing soap instead of the dishwasher soap!! Thankfully by the time I came back from my run, both were laughing at my stupidity. We dumped some balsamic vinegar in the dishwasher and I vowed to not touch anything in the house, or on this trip, again. So much for being helpful! 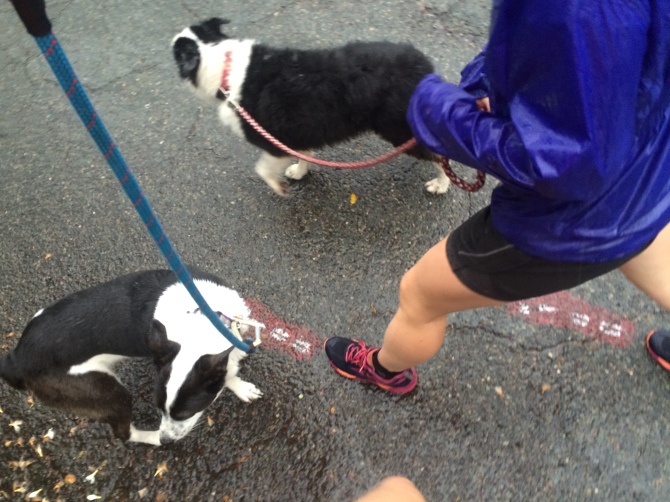 Outside of the general life skills, I think the running went well. Tara came 2nd in the 50km off of very little training, and I had a really nice run in the 15km, where I got to run with a new friend, Paolo. My favourite part was watching so many people finish the 50km all afternoon long, some people hand in hand with a friend or loved one, some laughing, some crying for joy, and all the while, drinking some delicious beer from my reusable collapsible cup.

Thanks to Auburn– for the never-ending trails, and to Ann for the endless inspiration. I feel so lucky to take part and meet the kindest people in California at Overlook every year.