Your NEVER too old to go to camp and run around like a kid! Salomon UltraRunning Academy was full of playing, learning, meeting new friends, and talking about what we all have in common; running and playing outside.

The camp felt pretty surreal the whole time; from when I found out I was going, when I was on my way there, when we arrived, and even on the way home; It was an amazing  and humbling dream world! I think when we all applied most of us thought our chances of actually getting picked to go were pretty slim (at least I did). I couldn’t have been more excited, and the camp was beyond what I even imagined!

Red Cliff Lodge down below– where we stayed

Day 1: Most of us flew into Salt lake city and met at the airport. We took two different vehicles and Claire  drove our van to Mohab (about a 3 hour drive). This was mainly a travel day, but of course when we arrived we all had the same idea in mind~ to do a little run and explore the area before dinner. 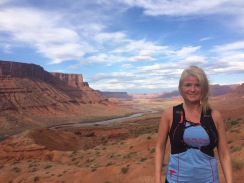 That evening everyone was “presented” and we individually introduced ourselves; where we are from, what we do for work, how we started running, etc. It was great to learn a bit about everyone before the week started! 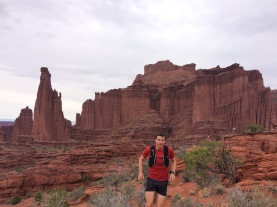 Each morning of camp (besides the race day) started off with morning yoga led by Anna Frost, breakfast, then Q&A time with Anna and Max King. We discussed different topics about running; such as nutrition, preparing for hot or cold races, and whatever other advice we wanted to talk about! Thank you!

We then went out for our first run as part of the camp. This day was about uphill running techniques. We broke off into 3 groups; one with Greg Vollet, one with Anna, one with Max and switched every 20 minutes.  I realized I really need to work on my uphill and I learnt a lot about how to use poles (I’ve barely used poles but I’ve been doing it all wrong)! This uphill workshop really made me more aware of my footing and posture the rest of the week!  When you have been doing something for awhile you don’t really think too much about technique and I just go out and hike or run! It was great to go back to thinking about some basics!

After the uphill workshops we continued running  around fisher canyon. Unfortunately Jessy rolled her ankle during this run and was in a boot the rest of the trip… :(.  She still kept a smile though throughout the whole time at camp!

Greg also dislocated his toe, in which Salomon Ultra player (podiatrist) Annie helped snap back into place on the trail!  Greg powered on the rest of the week, and even ran the race! He is crazy tough and you wouldn’t of known he had this injury!

After running we usually quickly fit in lunch (Usually Burgers! yum).. before heading off to afternoon workshops!

Every afternoon we broke out into smaller groups for workshops from 2-4, and then 4-6 pm. We switched groups over the next two days to get to all of the workshops…The workshops included a video group with Sebastien Montaz-Rosett; we ran around having fun learning how to use go pros, drones, and various filming equipment and techniques in the hills above our lodge. Another workshop consisted of communication and social media with Robbie Lawless. We also got to meet with Pierre Minary, product line manager to discuss shoes and look at different types of footwear and some protoypes. There was also a physiotherapy block section where each group was scheduled with Kristin Berglund.

During each workshop we talked a lot about  why we run, how we started running, and we had the opportunity to share our experiences and stories. I really enjoyed these workshops, as all of them gave me a chance to really learn a lot about everyone’s backgrounds and experiences doing something we all love. I found these sessions extremely powerful and inspiring from both the individuals leading them, and all of the athletes.

In the evenings we had dinner and then usually there was a presentation or videos. This evening we had a health and anti-doping information session and learnt how to access SHOL (Sport and Health Online) in which any athlete can contribute to anti-doping. It was great to see that Salomon is really taking a leading role in this; protecting their athletes, contributing to the anti-doping fight, and keeping this sport clean.

Was about “Accepting the downhill”. We had Yoga in the am at the lodge, breakfast, Q& A with Max & Anna, and out to Castle peak for a run. First we had to run wayy up before we could run down! 🙂

Dakota Jones joined the camp the prior evening and Greg had him demonstrate some downhill techniques. Running downhill from the top of castle peak was sooo much fun! I really love technical downhill, so I felt like i was in my element here (and was my favourite area). There is a great downhill video on Salomon Facebook of a group of the guys running down:

I was already at the bottom.. not because I am faster though ! .haha.

We woke up earlier than usual this morning (left by 6 am to get to Dead Horse Point) to do Yoga during sunrise. IT WAS SO COLD but amazing! 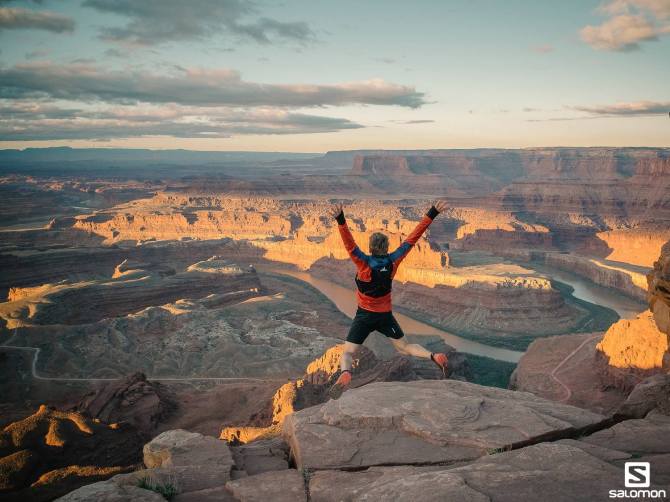 After we went for an “easy run” in the arches before the “Behind the Rocks” 50 miler race the following day. 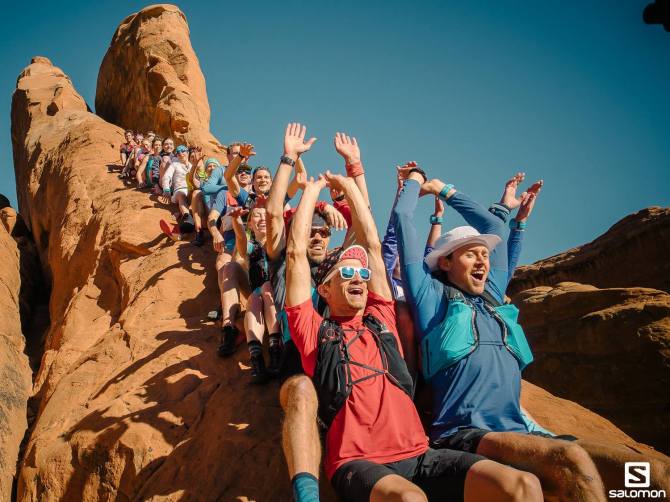 50 mile Race day- we were up early again and left the lodge by 4 am. (It was a 50 minute drive to the start of the behind the rocks race).

Since Orcas 50 km at the beginning of February, and even before that, I have had a nagging hamstring issue. I wasn’t doing super long runs… But, I rested enough that I was not completely injured in time for the camp!  I was able to get through the race feeling much better than I expected!!!  I went into it wanting to have as much fun as I could and thought of it as an opportunity to explore the area. It still was hard at the end (as any ultra is), and I was really feeling any of the hills! 🙂 I used the downhill sections to get excited and push when I felt good. There were some difficult sand sections on course, but also tons of fun rocky technical sections! 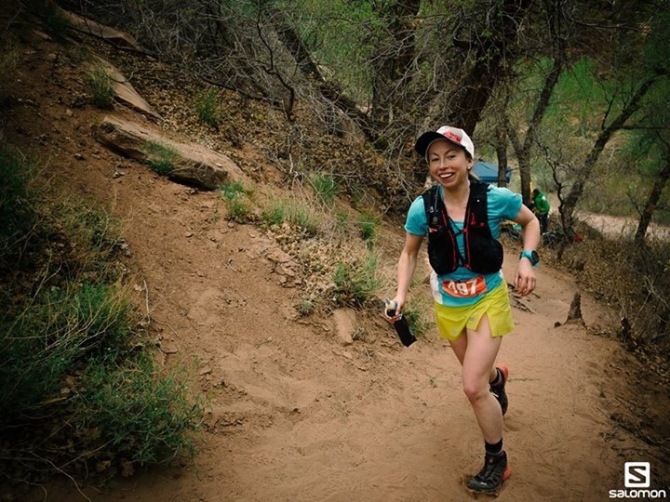 Me ~ about 60 Km in at the Behind the Rocks Ultra drinking all the coke.  Photo by: Robbie Lawless

Arden Young, during Behind the Rocks Ultra Race. Photo by: Robbie Lawless

Now what?! Finishing camp felt a bit like finishing a race (and we also did do a 80 km race)!  The rushing thoughts of:

What adventure do I plan?!

…All crept up very quickly. Luckily I have the most amazing trail running friends who jump on that opportunity and join in on the planning immediately.   I already have some long adventure runs planned for this summer with all my favourite trail runners.

After complishing a race or adventure run I always get that feeling of setting a new goal. This summer UTMB is already on the calendar, but more than any race, I can’t wait for these fun adventure runs with friends; most likely in Colorado, California, locally, and in Washington (Wonderland Trail), and more.

Going to this camp gave me an immense amount of inspiration from others around me. I was honoured to learn from amazing athletes about how they got into running, why they run, what they want to achieve, and about all of their amazing stories. I am lucky to have met such amazing new friends. I can’t wait to follow along in their journey’s and see what they all do next; whether that be having fun on the trails or racing.

I feel so lucky to have been able to experience this amazing adventure and excited to share what I learned with others in the trail community! If this sounds like something you are interested in and you are passionate about ultra running-  be sure to apply next year! I know I would do it again!

THANK YOU Salomon for such an amazing week I will never forget and for sharing your knowledge and inspiring all of us! Moab is such a beautiful place to play! #timetoplay

If you want to check out videos from the week check out Salomon Running Facebook page for links to videos by Sebastien Montaz-Rossett:

My You Tube Video Application:

One thought on “Salomon Adult Fun Run Camp in Moab Utah! A day in the life of Ultra Running Academy 2017.”