Two weeks ago, I scored a surprise last-minute invite from my friend, Chris: do you want to come skiing up Mt. Albert Edward with me and Faron on Sunday? We’ll pick you up from the ferry! That message couldn’t have come at better timing. For all of April I had been staring up at Garibaldi Park and the Mamquam Icefield from Downtown Squamish, it looked perfect for skiing, but I felt constrained by my running training, mostly always confined to adventures in the dirt. Suddenly this message from Chris came my way, and it just knocked me out of my running trance and opened me up to my craving for adventure. Yes. Damn it. I don’t know where that is at all, but I am very intrigued!

I accepted almost immediately without asking really where it was, with the caveat that my skiing would be horrendous, it had been months since I had skied! As though to sweeten the allure, there was talk of summit sardines, of camping at Comox Lake, Chris and Faron would even supply me all my camping stuff!!! 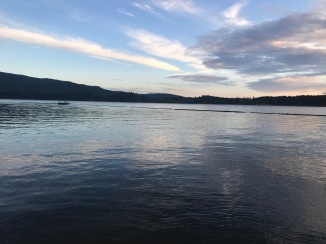 Camping at Comox Lake is the dream!

Eventually I discovered the destination was in Strathcona Provincial Park, a place I had really wanted to visit since, forever. I didn’t have any other idea except that it would be good conditions, and we would have to get up at like 4am, which seemed to follow my general equation of more time outside = more fun.

We rolled up to our beautiful campsite at Comox Lake at around 10pm, with plans to wake up at 4am. Bedtime was near until Faron realized, he forgot his avalanche shovel, 3 hours back in Victoria! Selfishly, I realized that this piece of gear was not for him, but for me – he would need to use it to dig me out, if I was to be buried in an avalanche. So, there was no way I would go without it. I instantly remembered the busy brewpub we drove through in nearby Cumberland… surely some of the people there would have some avalanche gear we could borrow? And so, it was decided, that we would descent upon unsuspecting Cumberland at 10:30pm, and seek out an avalanche shovel. Faron would maybe walk around the bars going from table to table asking to borrow gear, and we would support. Hey, we really wanted to go skiing tomorrow!

We spent the first twenty minutes in Cumberland searching a friend-of-a-friend’s yard for their avalanche gear, hoping that they just kept their gear outside, or used the avy shovel also as a garden shovel. (Yes, we were that desperate and tired!) No luck, as you might imagine. Next up in our quest was our idea to descend on the brewpub. Unfortunately the brewpub was closed. However, the band was just leaving, who we solicited, and they told us of a Mike and Lisa who could maybe help. Apparently, Mike was part of the local Search and Rescue, and so he likely had the gear. We were told he was wearing a Hawaiian shirt today, and he was apparently at the Waverly Pub, just a few doors down. So we booked it to the Waverly.

The Waverly had some sort of event going on with a cover charge, but they let us in for free when we explained our quest. It was a bellydancing show. Faron went to look for Mike in Hawaiian shirt, meanwhile Chris and I enjoyed the bellydances. Faron came back, he was in luck, Mike was found, and he had agreed to lend us the shovel, he even lived around the corner. However, we would need to wait until the bellydance finale, which was to happen in 30 minutes. 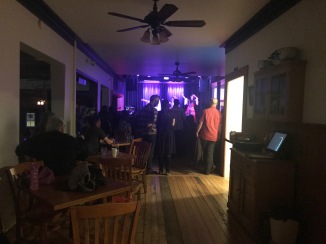 How badly do you want to go skiing tomorrow?! Would you go to a bellydance show?!

Chris and I watched more bellydancing, and then Faron decided to drive us back to the campsite to get some rest, he would go back to retrieve the shovel with Mike. Finally, just before midnight, Faron returned to the campsite, having earned a borrowed shovel and enjoyed a free bellydancing show in the process. Success! We gifted ourselves an extra hour of sleep, thinking that 5am would be fine, given the unanticipated visit to the Waverly.

The skiing was great, in fact just as awesome as the quest we had, the night preceding. There was snow right from the trailhead, there were amazing views to Desolation Sound, spring slush to ski, we witnessed cornisses breaking off safely in the distance, skins failed and we glued them on, and there was summit fever, which pushed us to spend an unplanned extra night together, strangely again, back at the Waverly. That place just kept drawing us back…

Remembering how to skintrack. Photo by Faron Anslow. 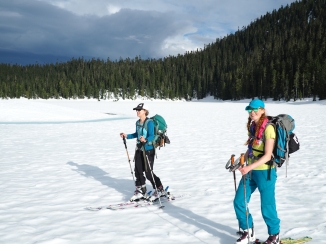 Skiing across lakes in spring will continue to freak me out. Note that I let Chris go slightly ahead to test the ice. Photo by Faron Anslow. 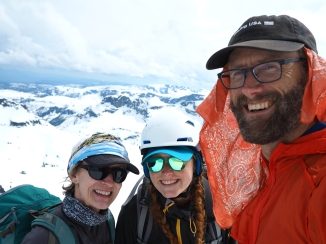 The ski down was so chill and fun! Photo by Faron Anslow.

Words and photos can’t really do it justice, you’ll have to go there.