It’s 1am near Mt. Esja in Iceland, and I’ve given up on sleeping tonight. I spent the last hour lying in bed, pretending to sleep while feeling every minute pass by. Maybe I would be sleeping if this week I planned to sit in Icelandic hot springs eery day. But I was lying there and nervous sweating, thinking about how I plan to run 120km through the French/Italian Alps in about 48 hours…

Rather than watch the clock tick or worse, trying to remember how to drive manual with the rental car, I decided it would be a good idea to brainstorm and consider some inspiring / motivational quotes for my future self. (Hopefully, the less nervous, less jet-lagged me…)

This is my usual go-to. It succeeds in taking the pressure off before the race, and perhaps I would sleep better if this becomes my mantra.However, I can count on two hands, the number of times I’ve tried to reach to this “motivation” while running, and it simply did not work. Times when, it wasn’t fun, say I was puking, or nauseous, or perhaps feeling like a soldier in the military. In those times, the thought failed to motivate me, as I simply denied it. “This is not fun!” I would easily reply. 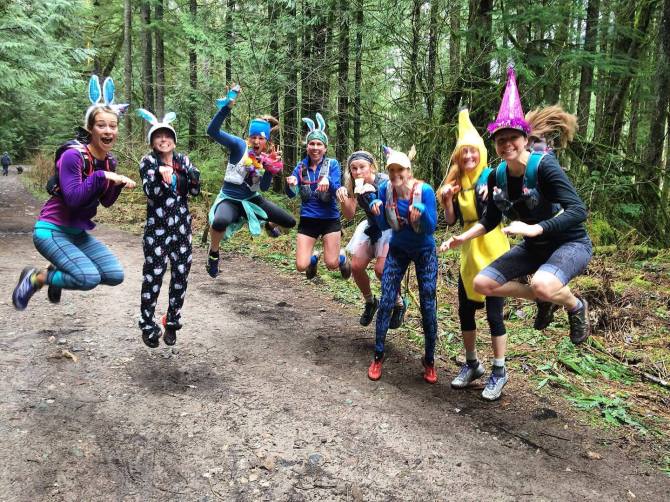 This is probably not what it looks and feels like when you’re trying to tell yourself “this is fun” in the middle of something long and hard. (Unless the Squamish/Vancouver girl gang, depicted, has surrounded you on one of their birthday, halloween, or other random celebration runs!)

2. People you care about are rooting for you to finish!

I’ve used this one before, once or twice, in long running races. For example, Diez Vista 100k in 2018. I’m from the town where this race is held, so going into it, I felt some hometown pride, and that it was important to have a good race. It was honourable or something. I was excited to have my dad and stepmom come to the finish line in the afternoon, and at the start of the day, the thought of having a good race, and sharing in the joy/excitement and whatnot really made me stoked. Fast forward to 50km, halfway. I wasn’t having fun, felt so sick to my stomach, and I was about to have to repeat everything on the course again, in a series of small loops and lollipops. The thought re-surfaced about how “I’m from here” and “it’s time to make the family proud”. But at 50km, I was suddenly wiser. I knew that my dad wouldn’t care whether I finished, won, lost, puked and quit, or puked and finished. As long as I was healthy, non-injured and happy, whatever the result, he would be happy. My dad’s pride wasn’t contingent on some crazy challenge. With that, I got to halfway without any remaining joy, and handed my race number in. (Update– the 100km is no longer offered, so you do not need to subject yourself to this.) 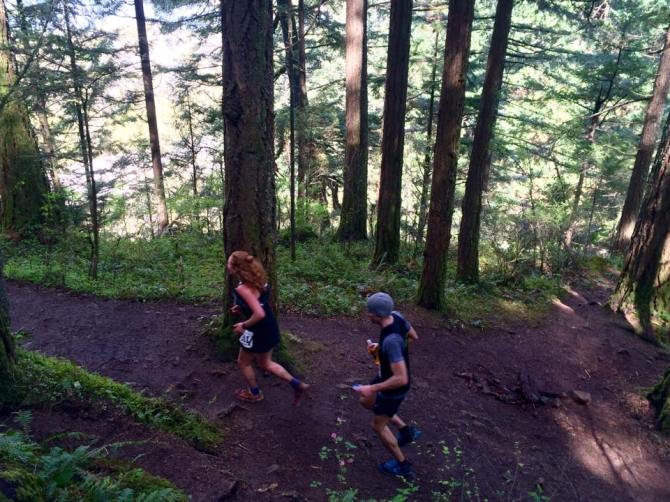 3. You travelled alllll the way here.

This motivation comes in handy when you’ve travelled a long way for an endurance challenge. Maybe you drove for hours, or you even flew somewhere internationally. I used this one during CCC in 2018, as I had flown all the way from Canada to France to run in the race. Honestly, this one does sometimes work for me. It quite effectively taps into the right pang of guilt for me, having dedicated so many resources to get there– the money, the annual vacation time, your partner’s annual vacation time, etc. I caution about using this one, however, because the same thinking can lead to the related thought, “but if I stop, maybe I will enjoy my vacation more, and be able to do more“– quite a wise thought, especially given how tired your brain is during these endurance events.

Tory, Mike and I on our first run all together, around 2014, a fun journey from Squamish to Whistler.

I could rarely use this one, it’s too ballsy for me. It’s implying that the work is done, you’re so ready. With trail running, I never feel ready. I always feel like I’m up against a mountain, which I am, most often. A ton of them. Usually I’ve either overtrained, or I’ve gone skiing instead of running too much, or I’ve been anemic, or most recently, I didn’t learn how to use crampons for the Mt. Baker Ultra! Anyway, rarely does it go ideally. Thinking about the preparation would just draw my attention to the gaps. I think people can use this one when they’ve pushed hard in training and then they can remember that feeling in a race. Unfortunately it doesn’t work for me: my memory for pain is like a squirrel monkey’s, I undergo the pain and then never remember it again.

Who am I kidding, I’ve actually been training my whole life for these things… (my poor parents!)

After thinking about all the idealistic self talk, I think this is the only thing that makes me move forward, toward the end of whatever crazy thing I signed up for, more quickly than otherwise. In a long event when I need this type of self-talk, it’s probably not feeling fun, I probably don’t care what other people, or my future self think anymore, or how long it took to train or to get there. My brain is basically cutting through all that bullshit in a primitive way, there is no cognitive thinking involved. To deal with this exhausted, primitive side of myself, I can only hope to motivate myself in a super basic, simple way: get to the next care station! When I think of that, everything else erodes away. It helps me just move forward toward the goal, without thinking about it, idealizing, getting in the way of myself. Come to think of it, all my “motivational thoughts” are ineffective anyway, and so it’s best to shut those thoughts down and just run. 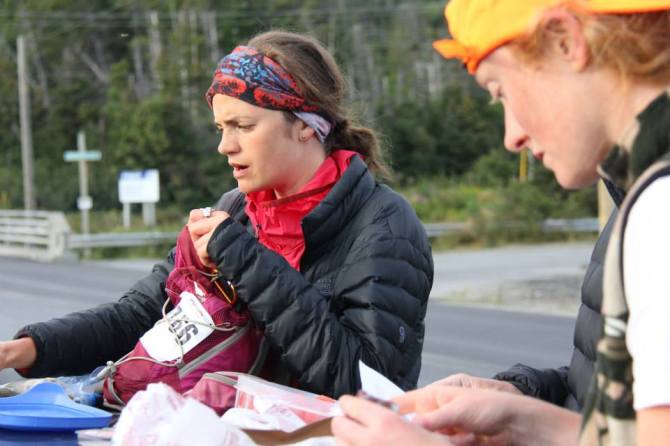 Running the East Coast Trail with Katie in 2015. Obviously it’s so much easier with a good friend and a killer support crew (Katie’s dad would give us a briefing of the next 10km, at every section!!)

What are your motivational thoughts that help you get to the finish of whatever crazy thing you dreamed up and committed to?