I just watched an inspiring TED talk by Caroline Paul: To Raise Brave Girls, Encourage Adventure. For starters, Caroline is an amazing role model: eloquent and intelligent, she’s also a paraglide captain, a firefighter, and she once attempted the world record for crawling. (She crawled for 12 hours!)

Caroline tells us how there is a gender bias in promoting bravery at a young age: while young boys are encouraged to engage in “risky play”, young girls are often told to avoid risks, to be careful. I’m not going to lie, when I asked to play hockey at age 9, I was registered for figure skating. (Although, I ended up finding a way to make that risky, attempting triple salchow over and over and over.)

This is part of the reason why Jo, Nancy and I made Girls Gone Wilderness, to do a small part in shaping opportunities for young women to be tempted by adventures that promote excitement, fun, and a bit of courage. It’s not always natural when we’ve been raised to see mostly guys doing adventure sports, especially in biking, skiing, and the extreme adventures. (Ps! Our next event is almost sold out!)

After watching Caroline’s TED talk, I wanted to go back in time and meet some of the most courageous women throughout history. I went down a (wonderful) rabbit hole learning more about Katherine Switzer, (she broke the rules to become the first woman to run Boston Marathon) and Lynn Hill, (she was the first person, male or female, to free-climb The Nose in Yosemite) and Ann Trason (she broke, like, 20 world records in ultra-marathons). It was overwhelming, in a great way, and so I had to focus closer to home.  Today’s blog is about an inspiring BC mountaineer, whose first ascent was Grouse Mountain!

Local BC lady Phyllis Munday, born in 1894, had a lifelong mission in the mountains. The first woman to reach the summit of Mount Robson, she was unique not only for her first ascents, but for her style of achieving them: she and her husband Don achieved many first ascents together, even after having a family.

Photo from Mountain Life Media’s article about Don & Phyllis. Check it out!

Phyllis and Don pioneered routes in some of BC’s most sacred places, like Mount Waddington, where they spent over a decade of failed attempts. There is now a Mount Munday in the Waddington range (which, of course they summited, in 1930).

All this during a time when women weren’t really meant to even wear athletic attire:

Her male team members barely blinked when she’d stash her respectable city skirts somewhere on the trails and carry on in her bloomers. This was somehow less risqué than wearing trousers or knickerbockers.
Account from Experience Mountain Parks

To put this in perspective, when Phyllis was in her 4th or 5th attempts at Mount Waddington, US women had just gotten the right to vote, and women in Toronto still weren’t showing leg in public.

Time to do more, worry less. Like this time I had to crab-walk down a descent in the Rockies that scared me: 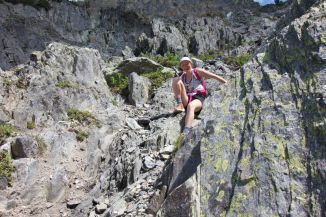 “Women, like men, should try to do the impossible, and when they fail, their failure should be a challenge to others” – Amelia Earhart