The day was young, and there had not been nearly enough coffee.

At 7am Mike, Nate and I were  shuffling through Whistler Village, with our eye to completing the Spearhead Traverse, a hugely popular ski route.

Except, we didn’t have skis, and we weren’t planning on getting any. On this September day, we were planning to generally follow the idea of the popular ski traverse, but as a run & hike alternative. Skirting below the glaciers and above the trees, we thought we could do it in about 40-50K, one adventure day. 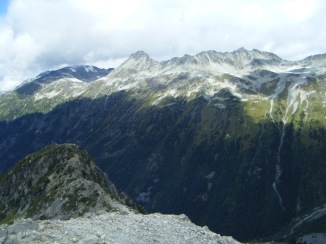 The goal is to get over to that ridge across the valley, through the path of least resistance. Photo credit: Mike Rose.

It was all Mike’s idea. With a summer off completing any big 100 mile run and months spent cooped-up in injury, he was jumping at the bit to run as many big Sea to Sky routes as he could before snowfall. He had just pioneered this other great run, Elfin Lake to Garibaldi Lake, and he was on a mission to complete as many grand Sea to Sky traverses as he could. Part of what made it exciting is that you just don’t find trip reports of people doing these traverses as a run. Mike’s adventures were entirely new, exciting, and full of unknowns.

Just the start of the adventure, reaching the hut at Russet Lake.

I had just suffered from a cold from running one too many laps around Buntzen Lake, but I seemed fine enough to join the party. So at 4am when the alarm sounded, I jumped out of bed immediately, ready for the fun.

Loaded down with tons of gear, we slowly ran the first part of the route, the standard trail up to Russet Lake near the top of Whistler Mountain. From there we could roughly see where we wanted to go, the ridges of the Spearhead Traverse, which lead all the way to Blackcomb Mountain, across the valley. It seemed so close yet so far, all at once. 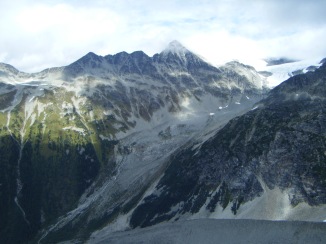 And now… how to get way up over there, just under the glacier?
Photo credit: Mike Rose.

Passing Russet Lake, our first task was to find a nice line across to the Blackcomb side, skirting under Overlord Glacier. As actual legit skiers, Mike and Nate are naturals at picking out lines in the alpine, and they looked ahead at the slope, determining which ways we could ascend. I stared ahead and sort of followed, thankful that these guys have much more of a knack for the alpine.

Our first obstacle was a little steep rocky slope. Maybe 45 degrees, for about 100 feet. Falling here wouldn’t be life-threatening, but you could get a few good scrapes or maybe hit your head if you descended awkwardly. I immediately entered Gramma mode, which led me to crab-walk down a small gully formation in the rock, only after spending a good two minutes frozen, holding up the whole group with my ass facing down the slope. (!!) Finally I got into a good crab-walk down the gully, and things were looking up. I got 50 feet down, and yelled up to Nate that he could start descending.

The rocks of wrath. As usual, they picture always looks so benign, how could anything bad happen here?
Photo credit: Mike Rose.

Then, a rock came flying down the gully where I was perched, about the size of two grapefruits. It was my worst nightmare. Of all the places the rock could travel on this huge slope, it was coming– right for my head. I had no time to think, react, or change my position. The next second, the rock rocketed forward and hit me good in the upper arm, and immediately I was in shock. Perched on the slope, suddenly lightheaded and my right arm totally numb, I felt helpless and useless. I wanted to get off the slope, but I couldn’t move. I think I let out some kind of audible surrender.

Somehow I slid my ass down the mountain and started mowing my chocolate croissant to regain the upper-hand over my body’s physiological upset. By now, Nate was talking good sense into me, suggesting that him and I could turn around right about now. I knew Mike was going to continue one way or another, and I wanted nothing more than for him to complete the adventure. Still feeling lightheaded, I started to weigh the options. Don’t be a wimp, I thought to myself. Some curious thoughts floated around my head. Maybe, finishing this adventure is a kind of dividing line between being tough or not… maybe this moment will define me… But thankfully, Nate’s voice countered those stupid thoughts.

Mike ran and got me some glacier ice for my arm, which gave me a good ten minutes to decide whether to carry on, or turn back. I couldn’t lift my right arm, but that didn’t matter to me. (Runners don’t need arms! I thought.) More concerning was that I still felt a bit lightheaded from the shock, and I was already in sub-optimal condition to begin with, recovering from being sick. Now I was a bit of a liability. And there was so much uncertainty about what lay ahead. Looking forward, we didn’t know what was on the other side of the ridge in front of us.

Suddenly it felt dumb to continue, with so much uncertainty about the challenges ahead, coupled with a whole list of known ailments. And suddenly, I realized this could become a hitchhiking adventure!

Choose Your Own Adventure: find your favourite line around the glacier! This is a shot looking back at the base of MacBeth from where Mike carried on solo. Photo credit: Mike Rose.

I absolutely love hitchhiking, I’d say, equally to the amount I love running. And so, with a fresh opportunity to hitchhike and with Nate as a poor sucker of a friend to come along, I decided the remained of the day would best be spent as an urban, gas-fuelled, stranger-filled adventure.

The second our thumbs flipped up, we were scooped up on the side of the Sea to Sky Highway. Our hero was Ramon, a Mexican entrepreneur/father from Mexico City, who had moved to Canada to help his family escape sketchiness in Mexico City. For the entire drive to Vancouver, we were treated to the inspiring story of how Ramon moved his family to Canada, how he had suffered from fraud with his first venture here; a restaurant he purchased which he had to bankrupt, and how he was not even acknowledging any setbacks, now a Locksmith to support his family and planning a second Mexican market and deli. We told him about running and biking on trails, and we were the first people he had met who do long distances. At the end of the car-ride, he said we somehow had inspired him, that he was going to start running in North Vancouver. In that moment, I didn’t care about the Spearhead Traverse. Connecting with Ramon, and hearing about what constitutes a great tamale, was so much cooler.

And what about Mike? Of course, Mike completed the route. Going most of the way solo, it took him about 10.5 hours including the first aid picnic, and he didn’t have to cross any glaciers, or anything sketchy.

Mountain or urban, it doesn’t matter. The Sea to Sky brings nothing but great adventures and inspiration, even on a day when things go south.